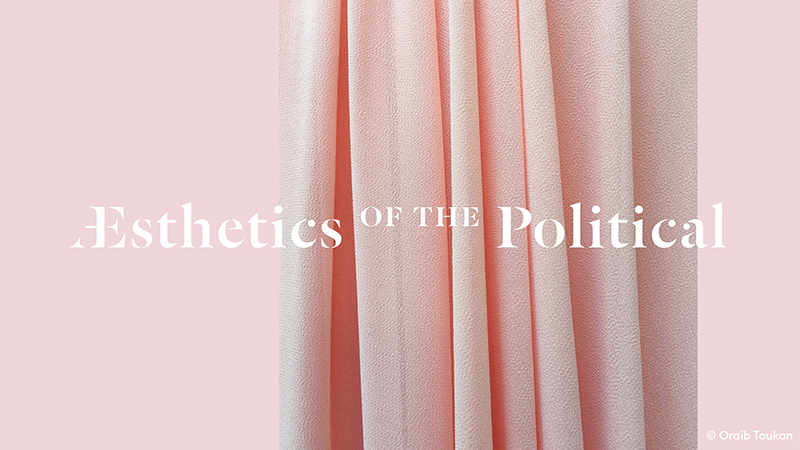 SEPTEMBER—DECEMBER 2020 // ON HOLD DUE TO ACTUAL RESTRICTIONS

A program of different encounters that takes time to look closely at the critical language, and forms of resistance in artistic work. Over the coming months we will come together in a series of events and conversations to experience artworks, discuss and engage with different artists, to reflect on the choices they make in their work when dealing with politically charged materials and different forms of coloniality.

In our first performative encounter, the artist Mirna Bamieh will present Menu of Dis/appearance, which brings us together in a much needed setting—around the table to break bread. Mirna Bamieh, narrates stories about time, history, and the parts of ourselves that slip away with lost food traditions. In her dinner-table performance she takes us on a journey through the dishes that are slowly disappearing from the Palestinian table, as access to wild foraging is restricted by colonial appropriation of both the land and the foods of the Palestinians over time. In this work, the artist takes the audience through the violence embedded in the meticulous erasure of identity of the colonised, even in their food culture.

Meanwhile, we would like to invite you to a sneak-peak into the world of the filmmaker Maxime Jean-Baptiste. In a conversation recently published on RectoVerso between Maxime and the artist/curator of this program, Samah Hijawi, they reflect together on the critical thinkers that inspire the aesthetical choices in their work: conversations-on-aesthetics-of-the-political

What do we mean by Aesthetics of the Political? Performative Discussion with Samah Hijawi, Sandra Muteteri Heremans, Ogutu Maraya and Mirna Bamieh

What do we mean by Aesthetics of the Political?

In the third encounter of ‘Aesthetics of the Political’ the curator Samah Hijawi together with Sandra Muteteri Heremans, Ogutu Maraya and Mirna Bamieh invites the audience to explore how the political takes its’ form in artistic practices of performance, image and text. Throughout the evening we will map out ideas of how artists and audiences produce and experience critical political resistance in artistic work.  How do we define ‘the political’? How do artists transform their critical thoughts into aesthetic form? And how does this criticality operate as political resistance?

The event is free, but you need to register here.

Samah Hijawi is an artist and researcher completing her PhD in Art Practice. In her practice, she explores the aesthetics of representation in artworks that allude to the histories of Palestine. Her works have been shown in KANAL, Kunstenfestivaldesarts, Playgroundfestival, The AM Qattan Foundation; MoMA, Nadine Art Space Brussels, The Hayward Gallery in London; BOZAR and Beursschouwburg in Brussels.

Ogutu Muraya is an author, theatre-maker and storyteller. To him, art is an important catalyst for challenging one’s beliefs and for keeping alive the history that is retold in error or which remains hidden from the mainstream. His works have been shown in numerous festivals: among others, at La Mama (NYC), HIFA (Harare), Afrovibes Festival (Amsterdam) or Spielart Festival (Munich).

Sandra Muteteri Heremans is an art historian and filmmaker. In her Master theses, she focused on the power and representation of the symbol in the art theory of Aby Warburg. Heremans later discovered experimental film and made her first short The Yellow Mazda and His Holiness (2018).

Mirna Bamieh is an artist from Ramallah/ Palestine. Her project ‘Palestine Hosting Society’ is a live-art project in which she seeks to examine the culture of food in Palestine. The research unfolds as culinary interventions that construct and reconstruct the relationships of place, history, society and politics, through food.

In the fourth encounter of Aesthetics of the Political we bring together a group of artists and filmmakers whose work take the image as the central point of investigation. Ranging from the mediatized to archival images of the colonial eras, and to the images conjured up from the narratives we inherit; each artist challenges us to question how images play a role in the construction of our personal, and collective narratives.

We begin the day with an intimate encounter with the artist Maxime Jean-Baptise who will take us through how his critical reflections inform his upcoming film Kouté Vwa. In the afternoon, we come together for a screening of the brilliant works of Oraib Toukan, Sabine Groenewegen and Miguel Peres dos Santos. This will be followed by a discussion with the artists on their different aesthetic choices in their work.  We end the day with the thought-provoking talk by Oraib Toukan ‘Cruel Images’ in which she reflects on our position as ‘consumers’ of images of war.

Oraib Toukan is an artist and EUME fellow at the Forum Transregional Studien in Berlin. She holds a PhD in Fine Arts from Oxford University, Ruskin School of Art. Until Fall 2015, she was head of the Arts Division and Media Studies program at Bard College at Al Quds University, Palestine and was visiting faculty at the International Academy of Fine Arts in Ramallah. Between 2015 and 2017 she taught at the Ruskin School of Art’s University of Oxford Graduate Teaching program. In Autumn 2018 she was Mercator fellow at the Cultures of Critique program at Leuphana University, Lüneburg. Toukan is author of Sundry Modernism: Materials for a Study of Palestinian Modernism (Sternberg Press, 2017), and the essay-film When Things Occur (2016). Her writings have ap­peared in a num­ber of pu­bli­ca­ti­ons, collected works, and biennale readers. Since 2011 she has been analyzing, and remaking works from a found collection of film reels that once-belonged to now-dissolved Soviet cultural centers in Jordan in 1990-1991.

Miguel Peres dos Santos (°1976, Lisbon, Portugal) is an artist who works in a variety of media. By emphasizing aesthetics, Peres dos Santos reflects on the closely related subjects of archive and memory. His artworks sometimes radiate a cold and latent violence. At times, disconcerting beauty emerges. Moments are depicted that only exist to punctuate the human drama in order to clarify our existence and to find poetic meaning in everyday life. His works demonstrate how life extends beyond its own subjective limits and often tells a story about the effects of global cultural interaction over the latter half of the twentieth century.

Maxime Jean-Baptiste (1993° FR) is a director and performer based in Brussels and Paris. Having lived in the context of the Guyano-Antillean diaspora in France, a French mother and a Guyanese father, his work as an artist sees himself as an exploration of the complexity of Western colonial history by detecting the survival of past traumas in the present. Her audiovisual and performative work focuses on portraits (artists, dancers or members of her own family) using the form of reenactment to conceive the potentiality of a living and oralized memory. He obtained a Bachelor's degree in Visual Arts at the erg and a Master's degree in Media Arts at K.A.S.K. School of arts (Ghent, BE).

Sabine Groenewegen is an artist working with moving image, collage, and immersive experiences. She is currently exploring the ways in which the experiences of our ancestors are part of our present and future psychobiological reality. 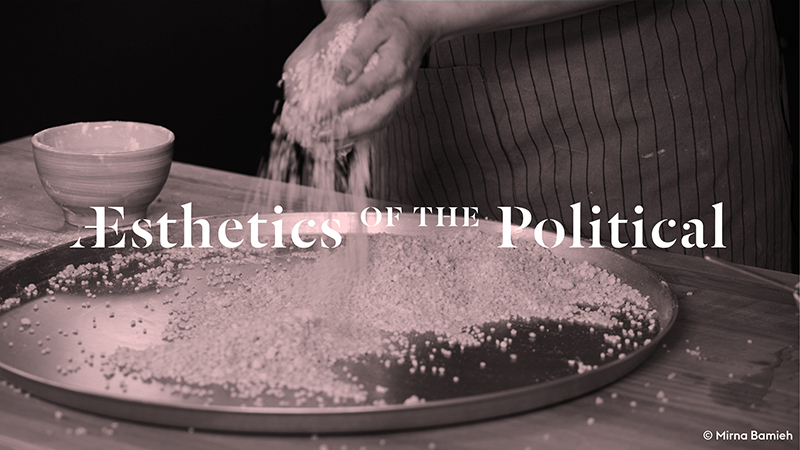 Menu of Dis/appearance, brings us together in a much needed setting—around the table to break bread. Mirna Bamieh’s work narrates stories about time, history, and the parts of ourselves that slip away with lost food traditions. In her dinner-table performance she takes us on a journey through the dishes that are slowly disappearing from the Palestinian table, as access to wild foraging is restricted by colonial appropriation of both the land and the foods of the Palestinians over time. In this work, the artist takes the audience through the violence embedded in the meticulous erasure of identity of the colonised, even in their food culture.

Secure your seat for the performance > tickets (from September 14th)

We ask a contribution of 15€ / person to be paid upon reservation.

*Menu of Dis/appearance worldwide premiere in New York, commissioned by the Fisher Center for Performing Arts, for the Live Arts Bard Biennial: Where No Wall Remains(2019)

Information on the artist:

Palestine Hosting Society is a live-art project founded and run by artist/cook Mirna Bamieh in which she seeks to examine the culture of food in Palestine that aims to construct and reconstruct their relationships to place, history, society and politics, through food. The research unfolds through eating, reading, and conversation. The research develops into culinary interventions that unpack social concerns and limitations vis-à-vis contemporary political dilemmas, reflecting upon the conditions that characterise contemporary Palestinian communities.

Mirna Bamieh is an artist from Ramallah/ Palestine. She obtained a B.A in Psychology from Birzeit University in Ramallah (2002-06). M.F.A. in Fine Arts at Bezalel Academy for Arts and Design in Jerusalem (2011-2013). Ashkal Alwan HomeWorks study program in Beirut (2013/14). Her work attempts to understand and contemplate the ever-shifting politics, while equally questioning notions of land and geographies of in-between temporality. Her work looks at scenarios that take the language of the absurd and the ironic and uses them as tools for political commentary. Currently, she is working on developing works that use the mediums of storytelling, and food for creating situational performances such as: Potato Talks Project, Palestine Hosting Society